The lights go out, the broadband goes down, the TV freezes… and no one knows why (scary music) • The Register

Something for the weekend, sir? Bzzz. The number of the incoming call is “Unknown”. I reject it, of course. Although I am intrigued by the idea of ​​receiving mystery calls from The Unknown, they are disappointing to answer.

Wait. Fiber broadband… that means something to you.

My doorbell rings. On the doorstep is an impatient broadband engineer holding a cell phone with “Call rejected x 4” on its screen. I like it when idioms become literal.

He came to see my connection because there is a fault. I don’t have time for this: I have an imminent appointment for something that is coming up on my agenda. As if to prove it, I instinctively wake up my smartphone to show it to him, trying to act casually as I sweep the “Reject call x 4” notification. See? I have an appointment right now.

It reads: “Visit from a broadband engineer.”

Ah yes, it’s all coming back to me. I had settled in to watch the final match of the Euro 2020 football tournament postponed to Sunday evening and my cable TV service froze at the time of kick-off. Of course he did. I’m used to it. My cable TV service streams 900 crappy unwanted reality channels 24 hours a day in UHD with no problem, but on the rare occasion that I really want to watch something I’m interested in, it becomes TITSUP *. It’s all part of the game of life.

I finally brought the TV stream back to life by turning everything off and unplugging, turning off the lights, running the cold water faucet in the kitchen sink, turning around three times repeating the words aloud. “Endless acquiescence”, when going out, locking the front door, unlocking my front door again, going inside, making three U-turns in the opposite direction while repeating “ornithological redamance”, turning off the running tap , turn on the lights, and plug and restart everything.

I actually had to do it twice, because the first time I accidentally got the steps “turn off the lights” and “let the cold water faucet run” in the wrong order.

Ah, home fiber optic broadband. The service open to all. 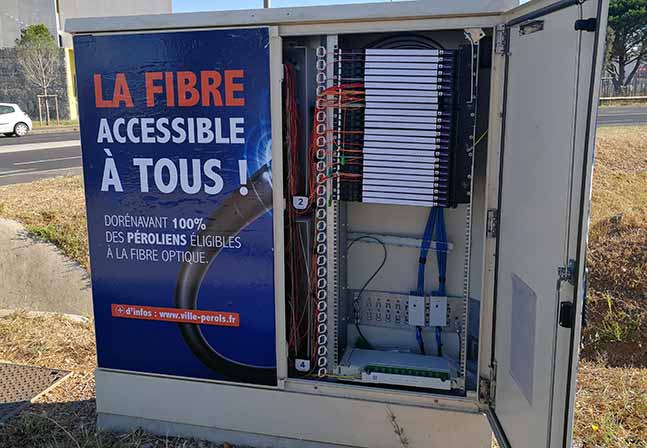 “Fiber broadband – accessible to all! Literally as you can see here.

Doing all of this at least reclaimed enough miserable bandwidth to watch the second half of the game in SD, along with extra time and even the England side’s long-term contractual obligation to lose on penalties in the game. goal. Fortunately, my team had already beaten Germany a week earlier, so I was spared having to watch one of the team managers engage in Scratch and sniff on the sideline. This sort of thing really turns me off my beer and Doritos.

On one of two occasions as I stood momentarily outside my own front door that night, some passers-by looked suspiciously in my direction, so I pretended to check my smartphone for something validating. my reasons for strolling on the doorstep wearing pajamas.

Brainwave. I decided to take this opportunity to report the loss of service to my fiber broadband provider via the wonders of 4G. I accepted the automatically assigned engineer appointment in three days and quickly forgot everything somewhere between the last part of overtime and the dazzling improvisation of Marcus Rashford. Riverdance during the penalty shoot-out.

Before that, the last time I sat in front of the TV just to watch a sports final was for the Six Nations rugby competition in March. Barely three seconds after the start of this match, the television turned off. To be fair to my broadband provider, the lights and all the other electrical devices throughout the house, and even on the neighboring streets, did the same.

I ended up watching the rest of this game on my smartphone. I know kidz prefer to watch movies and stuff this way, but I don’t. You lose some of the grandeur of a big sporting occasion when part of the chili tortilla chips you munch on falls on the screen and obscures half of the playing field.

While I was delighted to see 30 tiny men fighting over the millimeter ball on my smartphone, Ms. D called the power company to ask when the power would be restored. They thanked her for letting them know that there had been a power cut.

“I am delighted to be of service to you,” she said. “Contact me if you require further assistance, quoting code YU55L355BGGR5.”

Power returned the moment the referee blew the final whistle.

By now, however, the broadband engineer has finished resetting the line to the wall and my adorable two-way gigabit per second is restored. As I leave, I ask him if the problem was due to something I had done.

Did you have to replace any connectors or cables? “No.”

Has there been a local stall at the supplier? “No.”

That’s the problem with techs: they try to trick you with jargon.

I remember the two times I made an appointment with my water company to install a water meter. Both times they sent a contractor who asked me where the supply pipe went into the house. I told them I had no idea. Didn’t they know? Apparently not. So each time they left without doing anything.

It wasn’t until later that I wondered what would have happened if I had stopped paying my water bill. They would send someone over to my house to interrupt me, I imagine. They were asking me where the supply pipe entered the house. I would tell them, honestly, that I still have no idea. Neither would they, of course, so they would just have to go, their dark task unfinished, and leaving me with free water forever.

Another part of the game of life I guess.

However, my cable TV is now tuned. So I warn you: if you hear about an earthquake, a tsunami or a plane crash in my part of the country, it will be because I am trying to watch the Olympics. ®

Alistair Dabbs is a freelance tech enthusiast, juggling tech journalism, training and digital publishing. He’s a floating sports fan who shamelessly rocks his support between national teams as per convenience. That’s what it’s like to be a Scottish Englishman living in mainland Europe. More than Auto-save is for wimps and @alidabbs.

Hello, neighbors! It’s me again, Bea Karnes, your host for the Alameda Daily. First of …